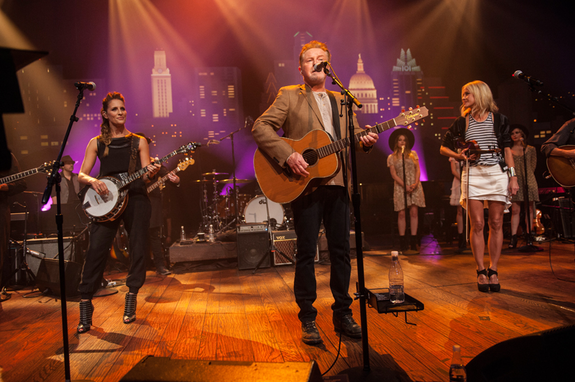 Don Henley makes his first-ever appearance on Austin City Limits (ACL) showcasing Cass County, Henley’s first solo release in fifteen years and first No. 1 album of his 33-year solo career. The iconic singer-songwriter and founding member of the Eagles performs a mix of solo hits and new classics in a very special hour, joined by many of the all-star guest vocalists featured on his acclaimed new record. The episode premieres Saturday, October 24th at 8pm CT/9pm ET as part of ACL’s new Season 41 on PBS. ACL airs weekly on PBS stations nationwide (check local listings for times) and full episodes are made available online for a limited time at http://video.pbs.org/program/austin-city-limits/ immediately following the initial broadcast. The show's official hashtag is #acltv.

Named for the East Texas county where Henley was raised, the country-leaning Cass County debuted at No. 1 on both Billboard’s top albums and country albums charts and features new original songs written by the music superstar and longtime collaborators Stan Lynch and Steuart Smith. Rolling Stone raves in a four-star review, “Henley has made an album of quietly defiant pure-country modernism… Everything in the music serves the sting and solace in the tales.” USA Today notes, “the emotional but unsentimental album draws on the music and the land of Henley’s youth, but it doesn't dwell there.”

Henley opens the masterful eleven-song ACL set with the radio classic “Dirty Laundry,” before taking viewers on a journey through Cass County, a musical return to his roots. He shines in an immaculate performance filled with highlights and duet partners featuring a parade of special guests: breakout country star and Pistol Annies’ Ashley Monroe, chart-topping country singers Martina McBride and Trisha Yearwood, country rebel Jamey Johnson and sisters Emily Robison Strayer and Martie Maguire of Dixie Chicks and Court Yard Hounds fame. Henley takes a few detours to perform select fan-favorite gems including “Heart Of The Matter” before the entire cast returns to join the longtime activist on the ACL stage for the powerfully evocative new ballad, “Praying for Rain.” Familiar opening chords signal his smash “Boys of Summer” as Henley and his band launch into the signature tune for a sublime set-ending closer.

"Don Henley has been on my wish list for 40 years, and I always knew he would come when he was ready,” says ACL executive producer Terry Lickona. “He's one of the best songwriters of his generation, and these new songs are some of the best he's ever written. He's at the top of his game right now, and it's an honor to have him showcase his new songs and classics on the ACL stage.

Dirty Laundry
When I Stop Dreaming (ft. Ashley Monroe)
The Cost Of Living (ft. Jamey Johnson)
That Old Flame (ft. Martina McBride)
Train In The Distance
The Heart Of The Matter
Where I Am Now (ft. Trisha Yearwood)
Take A Picture Of This
She Sang Hymns Out Of Tune (ft. Emily Robison Strayer & Martie Maguire)
Praying for Rain (ensemble)
The Boys of Summer